It is a warm evening here in Guatemala City. I’m in my apartment, sitting in front of the laptop, wondering how to begin this letter. It has been a long while since I’ve felt compelled to write a newsletter of any sort. What with email, Skype, Facebook, and cell phones there are now countless ways for me not to keep in touch with all of you. (Ok, I admit it… the mea culpa of non-communication.)

I’ve recently taken a good, hard look at my life in an attempt to discover which areas could use some improvement. Turns out there were a lot more than I thought. (Sigh.) One problem that stood out, however, was the fact that I have lost touch with many of you who are my foundation, my strength and my support. This is my first step towards righting that wrong.

For the past year I have been honored to be working with the Guatemala Human Rights Commission. Much more than a job it has been an experience, at times frightening, frustrating, exhausting, depressing, stressful, and heart-breaking… and other times moving, motivating, exciting, uplifting, and life-changing. Working with GHRC has allowed me to accompany the oppressed, defend human rights, speak out against injustices, and work alongside many of my personal heroes. I am, without a doubt, blessed.

I am also blessed to have you in my life: my family and friends. My amazing coworkers, interns and board members of GHRC. The communities of faith that support us. The incredible men and women who have visited Guatemala in delegations. And all of you who are committed to peace, justice, and human rights. I couldn’t do this without you.

And so, in a feeble attempt to repay my long overdue debt to you, I will do my best to start sharing some of these incredible stories and experiences with you. After all, they belong to you as much as they do to me. 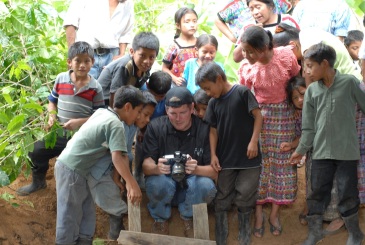 The river was silver, reflecting the overcast sky. Riding between the smooth waters and the flat sky was like gliding across an enormous mirror. Brown pelicans skimmed the surface of the slow-flowing river. The faraway shore was covered in the mist of the retreating rains. The only sound was the rhythmic chug-chug-chug of the motor and the soft spray of the water against the bow of the boat.

Abelardo, the young man sitting in front of me, turned and said in a barely audible whisper: “This is where they found my sister”.

Guatemala: a country of beauty, a country of pain. It strikes me time and again, that some of the most beautiful places that I have ever seen… places that could easily pass for paradise… are also the sites of some of humanity’s darkest crimes and and most despicable acts.

One year ago, on February 12th, three young indigenous activists were heading home after a day of studying at the university. Every Saturday afternoon they would climb into their small boat and ride it down the Rio Dulce river to their village of Quebrada Seca. Only this time they didn’t make it home. The boat was found the next day, containing only their backpacks and a watery pool of blood. The bullet-ridden bodies of Sebastian Xuc Cac, Alberto Coc Caal, and Catalina Mucú Maas… Abelardo’s sister… were later found floating in the river. Amilcar Choc, who had simply hitched a ride in the boat, was also assassinated.

All three, despite their young age, were respected leaders in their Maya Q’eqchí community. Sebastian, 30 years old, was a teacher in the village’s school. Alberto, 26, was a spiritual guide and involved in the campesino (peasant farmer) movement. Catalina, 23, was was the first woman from Quebrada Seca to graduate from high school, and a passionate advocate for women’s rights. Together they fought to defend their community’s lands against theft by a rancher with ties to a Colombian drug cartel.

The impact of these cowardly and cruel murders is impossible to measure. Lives were prematurely ended. Spouses were widowed, families were thrown into heart-breaking grief and depression. Sebastian had five children, Alberto had three. Catalina and her husband had decided not to have children until she finished putting her younger brothers through school.

And the terrible loss doesn’t end there. Who can say what legacy these three talented, intelligent, and committed young people would have left to their village, to Guatemala, and to the world at large?

I traveled to Quebrada Seca this past weekend to accompany the families and the community in commemorating the one year anniversary of the tragedy. I was in good company, joined by friends from UDEFEGUA (the Guatemala Human Rights Defenders Unit), Encuentro Campesino, and the Fundacion Guillermo Toriello. When we arrived the entire village convened in the community center. A solemn and somber mood lay heavy on the gathering. Even the weather seemed to be in mourning. Despite the fact that we were in the middle of the dry season, dark clouds had gathered overhead. After a brief while –as if the heavens themselves couldn’t contain their grief– the skies cried and the rain came pouring down.

The commemoration was attended by every man, woman and child in the village. One of the community members read a poem that he had composed in memory of the martyred youth. Others demanded justice for the barbaric crime. Still others urged the children of the village to remember and emulate Sebastian, Alberto and Catalina’s example of selfless dedication to the greater good.

After the event we went to visit the homes of the grieving families. The torrential downpour didn’t let up. Dirt paths turned into raging rivers of mud, and the soccer field became a shallow lake. The rain-soaked ground sucked greedily at our shoes as if trying to swallow us whole, soggy-socks and all. We ended up at the home of Catalina’s family, where Abelardo and his mother served us Kak’ik, a traditional soup made from turkey, tomatoes and spices. While we gladly warmed ourselves with the delicious meal, I noticed Abelardo shifting uncomfortably in his chair. Finally he summoned up the courage to speak. “My mom is worried that she doesn’t have enough money to keep my younger brother Victor in school. Catalina was paying his studies, like she did for me. But now…” Abelardo paused, and I felt my heart go to my throat. After a moment, he continued: “I wrote this letter. I was wondering if you know of anyone who might be able to help us.” He handed over a sheet of paper containing a long hand-written letter. “I know that it’s asking a lot, but we don’t have any other option. We just want Victor to be able to finish his studies.”

Much to Abelardo’s surprise everyone started smiling. Unbeknownst to him and his family, I had a secondary purpose in visiting Quebrada Seca: to deliver scholarship funds to the children of the victims. And, in a special exception, to Catalina’s and Abelardo’s younger brother, Victor. (GHRC, with the financial support of St Margaret’s Episcopal Church in Annapolis, MD is helping to guarantee the education of 40+ children of human rights defenders throughout Guatemala who have suffered threats, attacks, or violence because of their work.)

I watched as Abelardo translated the good news into the Q’eqchí language for his mother. Various emotions flitted quickly across her face: confusion, surprise, and then, finally, relief. As I handed the funds over to the family, assuring that Victor would be able to stay in school, a single phrase sang out in my mind: I’m in the right place at the right time.

I have to admit that I get that feeling a lot. Which probably goes a long way to explaining why I have spent half of my life in Guatemala. Yes, much of this work is physically strenuous, mentally demanding, and emotionally exhausting. Yet these encounters with the survivors of humanity’s most inhumane acts move me, inspire me, and light a fire within me that all of the rain in Quebrada Seca couldn’t possibly extinguish.

And I know, without the slightest doubt, that the words of Helen Keller are true: “Although the world is full of suffering, it is also full of the overcoming of it.”