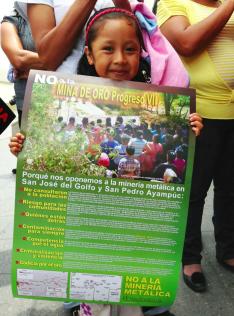 Today, representatives of the communities of San José del Golfo and San Pedro Ayampuc participated in a reunion called by the President of the Republic, Otto Pérez Molina. The meeting was scheduled for 10:30 in the Presidential House. The Minister of Energy and Mines, Erick Archila, the Interior Minister, Mauricio López Bonilla and representatives of the American company, Kappes, Cassiday and Associates also participated. Community members asked that the mining representatives leave, as the conversation was with the government, not the company.

The meeting with successful in the sense that the communities were able to share with the President their reasons for firmly maintaining their resistance to the mine.

Some of the communities’ concerns include:

For his part, the President took into consideration the concerns put forth by the communities and proposed that a new environmental impact study be carried out. The topic has not been exhausted, and  meetings between the government and the communities will continue.

Even though this is a positive step, the communities are clear that they still say NO to the mine. As one leader, Yolanda Oquelí said “You don’t negotiate with life, you defend it.” The resistance in La Puya continues.