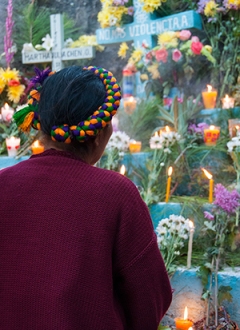 Fifteen years after the presentation of the UN Historical Clarification Commission report on Guatemala’s internal armed conflict — a day that has become known as the National Day of Dignity of the Victims — we express our solidarity with and respect for all the victims and survivors of the conflict. We also recognize the organizations and institutions that have accompanied them, and all those who have contributed in one way or another to processes seeking truth, historic memory, justice and just reparations.

On February 25, 1999, the UN Historical Clarification Commission (CEH) presented its report “Guatemala: Memory of Silence” in Guatemala City. Those present included then president Álvaro Arzú, the military high command, representatives of the URNG and a multitude from civil society.

In 12 volumes, the CEH reported the results of its investigation into the horrors suffered by the population during 36 years of internal armed conflict. From the data collected, it was possible to estimate the impact of the violence: 200,000 dead, 45,000 forced disappearances, and the displacement of one million people. The report found that 83% of the victims were Mayan indigenous and that at least 93% of the atrocities during this period were committed by State forces or paramilitary groups linked to the State.

It also found that “approximately a quarter of the direct victims of human rights violations and acts of violence were women. They were killed, tortured and raped, sometimes because of their ideals and political or social participation, sometimes in massacres or other indiscriminate actions.”

The CEH concluded that “other parallel phenomena, such as structural injustice, the closing of political spaces, racism, the increasing exclusionary and anti-democratic nature of institutions, as well as the reluctance to promote substantive reforms that could have reduced structural conflicts, are the underlying factors which determined the origin and subsequent outbreak of the armed confrontation.”

The CEH report is not only a look back into a dark past, but also a warning for the government in the future. As the philosopher Jorge Santayana noted, he who ignores his past is condemned to repeat it.

It is with much concern, therefore, that in the last few years we have witnessed a lack of political will and the closure of mechanisms created to contribute to much needed national reconciliation. We have also observed that tools for repression mirror those from the conflict, including threats and intimidation. Men and women who are leaders in communities that raise their voice to defend their rights continue to face political and legal persecution.

The judicial system has made important advances, but in many cases still responds directly to sectors of society that hold political and economic power. Weak public institutions, corruption and militarization of public security also continue to obstruct transparent and democratic reforms.

Challenges continue for state institutions, and today we call on the government to recommit to democratic principles, to strengthen transitional justice mechanisms, and to demonstrate the political will to seek just and peaceful resolution of conflict.

For the victims of armed conflict in Guatemala, the disappeared, the displaced and razed communities, and all the families that remain committed to the search for truth and justice, we express our deepest commitment to continue accompanying you in your struggle.