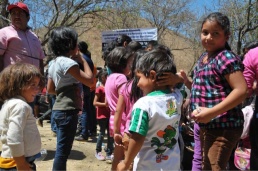 Members of the peaceful resistance at La Puya are facing threats and intimidation once more from mining company Kappes, Cassiday and Associates (KCA). Yesterday, a new KCA subcontractor, Transmac, attempted to bring heavy machinery into the mining site. Due to community pressure, Transmac eventually removed the mining equipment, but a strong police presence has grown and remains around San Jose del Golfo. For updates, check our blog and Facebook page.

The 26 candidates that the Nomination Committee is considering for the next attorney general position underwent psychiatric evaluations. The results of the evaluations, however, will be kept confidential. Human rights advocates expressed their concern for the lack of transparency that surrounds the selection process of the Nomination Committee. The Committee will also review objections presented against 15 of the 26 candidates, among them current Attorney General Claudia Paz y Paz. Those who have received objections must submit evidence regarding the accusations in order to continue in the race for the attorney general position.

At the Central American Regional Security Conference last week, leaders from Latin American nations, the UK, and the US met to discuss Operation Martillo, the illicit trafficking mission in Central America and the Caribbean. Beginning in January of 2012, the mission has aimed to dismantle criminal organizations and confiscate drugs being trafficked through the region. U.S. Marine Corps General John Kelly, commander of U.S. Southern Command, called the mission a success, and he and Guatemalan Chief of National Defense Major General Rudy Ortiz met with human rights group Grupo Apoyo Mutual to involve civil society in the operation.

Femicide gets spotlight in court

Guatemala is ranked as having the highest number of femicides in the region, though it is making progress through femicide courts created in 2010. This article outlines the death of 18-year-old Estéfani Julissa Estrada Neill at the hands of her ex-boyfriend, who was given a 50-year prison sentence. Hilda Morales Trujillo, director of the Public Prosecutor’s Office of Victim Services, drew attention to the fact that femicide is not just the female counterpart to homicide, but it is a “result of unequal power relations.” Although progress is being made, challenges facing the courts include shortcomings in the use of forensic evidence, excessive reliance on testimonial evidence, and the fact that the courts are not operating all over the country.

At the hearing of Felipe Solano Barillas, alias “Lieutenant David,” families of the 22 people killed in the El Aguacate Massacre in 1988 testified and were horrified to finally learn the details of their relatives’ murders. The El Aguacate Massacre is one of the few massacres that took place during the civil war at the hands of guerrilla fighters. Solano Barillas is the only ex-guerrilla being tried.

The Guatemalan Bar Association (CANG) issued a one-year suspension against Judge Yassmín Barrios, who issued the initial ruling against former military leader Efraín Rios Montt, which was later overturned. The suspension derived from an accusation from José Mauricio Rodríguez’s legal team regarding Judge Barrios’ supposed abuse of power. Judge Barrios fought back against the suspension, noting that it signifies “that the door to impunity and corruption is being opened.” GHRC stands with other human rights organizations in support of Judge Barrios.

The Cabinet of Indigenous Peoples, headed by President Pérez Molina, was created to comply with the state’s promise to contribute to the construction of equality and unity among various ethnic groups in the country. According to indigenous rights advocates, however, the installation of the Cabinet is simply a political tool for Pérez Molina to use as positive publicity in the 2015 election and stands no chance of getting any real work done in 2014.

In addition to the case brought against El Periodico editor Jose Rubén Zamora earlier this year by Vice President Roxana Baldetti, Juan Luis Font — editor of the magazine Contrapoder — will be tried for criminal libel. Reporters Without Borders has condemned the charges and is urging authorities to “recognize this judicial aberration.” Guatemala is ranked 125th out of 180 countries in the 2014 Reporters Without Borders press freedom index.

Guatemala ranked fifth in countries with the most homicides

According to the UN Office on Drugs and Crime (UNODC), Guatemala is ranked as having the fifth highest homicide rate in the Americas, behind Honduras, Venezuela, Belize and El Salvador, respectively.