The below excerpt is part of an interview with Todd Robinson, the US Ambassador to Guatemala, published in Nómada (in Spanish). With increasing calls for President Pérez Molina’s resignation, Ambassador Robinson has come under fire recently by Guatemalans who accuse him of helping to “prop up” a corrupt administration. The interview contemplates the role of Robinson and the US in Guatemala.

Selected questions and answers from the interview, translated to English:

Question 1: Right now, no one wants to be seen with President Otto Pérez, and you do. What message would you like to send with your appearance at the Presidential House? Aside from the issue of polygraphs. 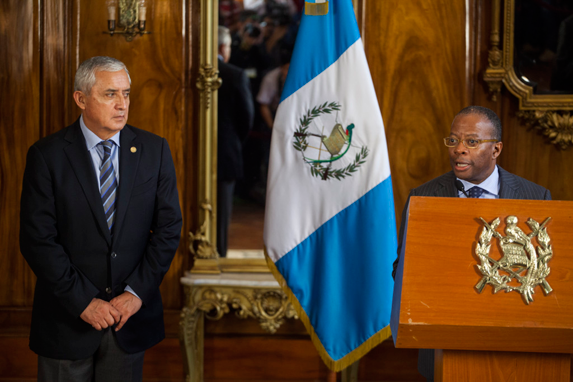 A: None. The government has asked us to help with the SAT [Guatemala’s tax collection agency] and we had polygraph equipment [and technicians]. There was a team of Guatemalan businessmen who were in Washington to discuss the Alliance for Prosperity and they asked for help with several institutions from the State Department. It was a happy coincidence that we had that equipment. I don’t believe that it’s a secret that we work very closely with the government. We don’t have the luxury of choosing the Guatemalan government—it’s the decision of the Guatemalan people. And of course, because we are good partners, or want to become good partners with the Guatemalan society and the government, when they ask us for help and we can help, we’re going to do it.

Question 3: [referring to the opinion expressed by the phrase “Here, Todd is not in charge; Here, the people are in charge” written on a poster held by a protester photographed on June 6]: How do you interpret this opinion? What message would you like to convey to the people?

Question 5: How has the US intervened in this [political] crisis? What role has it had in the resignation of Roxana Baldetti and in the decision for the president not to resign, despite the peoples’ demands?

A: I would say this: we have always tried to search for trustworthy leaders… authorities with whom we can work. But we don’t have the luxury of choosing who is in the government and who isn’t. The Guatemalan people—2 million Guatemalans, I believe—voted for this government, and are going to have the opportunity of selecting a new one in the future. Whoever it is, we’re going to have to work with the Government of Guatemala, since we’re seeking allies and partners for the future. We have a lot to do in the future to manage the Plan for Prosperity, to continue the fight against corruption, and to continue improving access to justice, security, and with [addressing] illegal migration to the US.

Question 10: What opinion does the US have of President Otto Pérez Molina?

A: We hope to work with him for the rest of his time as president. As I have said, there is a lot to be done and he’s going to have a central role, for example, in the Plan for Prosperity. His government is always going to have a central role in the fight against drug trafficking. There is a large problem with violence in the country, and there’s a large problem with misuse of resources. I’ve had the opportunity of traveling to Chichicastenango, Xela, Cobán, Puerto Barrios, and the conditions of the people there in many cases is tragic, very tragic, very sad. And I link the theft of resources to the conditions of these people and I see it as a big challenge for the people, for the international community, and for the government of Guatemala.

Question 15: You mention the Alliance for Prosperity Plan, but that plan basically consists of providing cheap labor [in Central America] so that businesses—both foreign and domestic—can continue making millions. Strategically, in what way does this regional plan benefit the US?

A: I disagree with that because if there had been jobs we wouldn’t have seen desperate people, trying to get to the United State on a tragic trip through Mexico. They would have job opportunities in their country, and I believe that they would stay here in their country, if they had education and access to justice. They’re there [in the US] because [in Guatemala] there is a lack of jobs, sufficient education, and physical and economic security in the country. And if we as a government could help Guatemalans change these conditions, we would try to do so.

Question 17: But in 2014, USA included Guatemala in the Bilateral Working Group on Military Matters, together with other countries of Latin America. Is the military issue in Central America a priority for the US?

A: The military is not a priority. We are focused on… civil security. We are working very closely with the police, with task forces in Tecún Umán (on the border of Mexico) and Chortí (on the border with Honduras) and I hope we can establish two more… Most of them are National Police and we are trying to expand security in the country, forming groups and civilian units that could help in areas that lack security. They are working very closely with the Public Prosecutor’s Office to put more prosecutors in these areas and it’s part of a much larger plan to attract businesses, employment and investment to those areas where employment is needed.

1 thought on “Excerpt from Nómada interview with Ambassador Todd Robinson”