La Puya activists staged a protest in front of the Guatemalan Ministry of Energy and Defense (MEM) in Guatemala City today to demand that the government body act on the Supreme Court’s ruling to suspend the license of Kappes, Cassiday & Associates (KCA). The U.S. – based company is responsible for an illegal gold mining operation at El Tambor, where La Puya residents have organized a peaceful resistance movement against company for over four years. Members of La Puya have protested the operation’s negative environmental impacts as well as the company’s failure to secure the community’s Free, Prior, and Informed Consent on the project. During the demonstration, protesters blocked two of three lanes of the street, blowing whistles, and chanting to call attention to their demands, which included that the Minister of Energy come outside to address them directly. The Ministry did not meet this demand.

While a few police officers did arrive at the protest, the protest remained peaceful. Representatives from the Human Rights Ombudsman Office (PDH) as well as members of the press were also present. 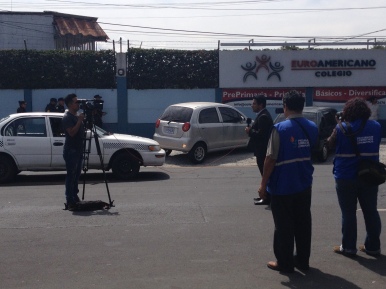