On November 3 in the Alta Verapaz region of central Guatemala, 18 families were violently displaced from the Semuy community in the Cahabon municipality. According to a verification mission of human rights defenders from the United Committee of Campesinos (CUC) nine armed private security guards stationed just outside the community had been intimidating the community on behalf of a property manager. 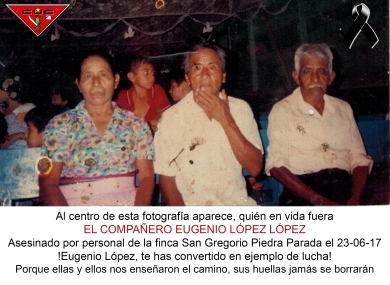 Two weeks later, on November 20, the families were attacked again by armed private security guards contracted by the company Trece Aguas. At around 6 pm the guards captured 54-year-old Erwin Che and threatened him — eventually the family members were able to free him. At 11 pm a group of men returned, surrounded the community and opened fire for 30 minutes. In the attack Ricardo Maquin was severely injured and Emilio Toc was killed.

According to testimony from locals, a worker for Trece Aguas, Javier Choc, led the raid. In the days prior, Choc had apparently offered between Q60 and Q80 Quetzales to those willing to intimidate and attack the families.

The CUC has called for an immediate investigation into these actions

CUC has reported several other killings and attacks of land rights defenders in recent months. According to CUC, Eugenio López López, 72-years-old was killed on June 23, 2017 in Quetzaltenango, by the Campollo y Quintanal families, owners of the San Gregorio Piedra Parada farm.

On August 9 campesino leader José Aroldo Orozco from the La Montañita community in the Ayutla municipality of the San Marcos department was murdered. He had allegedly been trying to regain land that had been taken from families and had just won a case in his favor.

These reports are in addition to several others detailing violent attacks, threats, and illegal detentions.