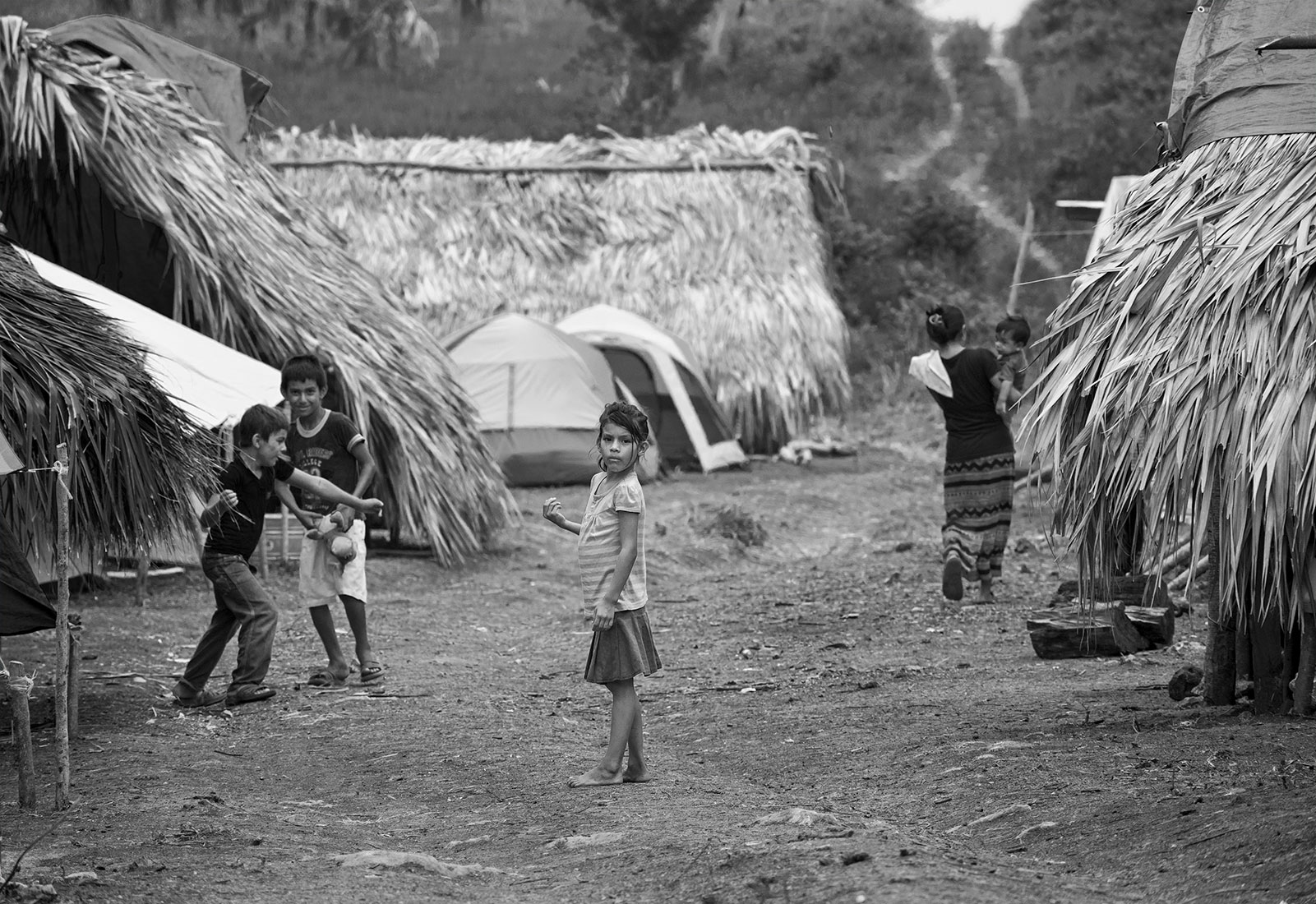 In an October 1  press conference lawyers with the Human Rights Law Firm, representatives of the Campesino Committee of the Highlands (CCDA), and Aldo Léon, of Voces Mesoamericanas, reported on a visit conducted this week to the displaced community of Laguna Larga. The group condemned the lack of compliance from the Guatemalan Government in finding a solution for the community forcibly evicted from their lands in 2017. Even with protective measures issued by the Interamerican System, as well as rulings from both the IACHR and Constitutional Court in their favor, the community continues to live in deplorable conditions at the Guatemala-Mexico border. According to Congressman Aldo Davila, “The situation is extremely concerning, there is a maximum expression of human rights violation,” including “the rights to health, education, and nutrition of these Guatemalans.”

Located in the Petén region of Guatemala, families of Maya Chuj and Maya Q’eqchi’ origin established the community of Laguna Larga in the early 1980s. For over 30 years they lived sustainably and built their community; by 2017–with no support from the government–they had built a school, churches, a medical center and homes for over 100 families. The crops they planted provided not only food and income for themselves, but helped to sustain the region economically.

In 1989, the Guatemalan government established the protected area of the National Park of “El Tigre de Laguna” and began to make plans to evict all of the communities settled within its borders, including Laguna Larga.  The communities entered into a dialogue process with the government seeking a solution whereby the communities could remain and act as custodians of the park.

On the evening of June 1, 2017 the families of Laguna Larga received word that a large contingent of National Police and Military forces were en route to forcibly evict them from their homes. Hoping to avoid violence, the families gathered up whatever they could carry and fled in the dark of night. The following day the Guatemalan security forces arrived in Laguna Larga, burning down the houses, vandalizing the churches, and killing the livestock.

The men, women, and children of Laguna Larga sought refuge in a narrow strip of inhospitable land along the border. They hoped the government would let them return to their lands, or at the very least provide them somewhere else to live. They have been waiting for over four years.

Currently the community lives in houses made of scraps of tin, without potable water, and with no lands to farm. The only medical care–including vaccinations against COVID–has been provided by organizations in Mexico. Four community members have died as a result of health issues exacerbated by or stemming from the poor living conditions.

In 2017–with the help of GHRC–the community solicited protective measures from the IACHR, citing evidence of lack of potable water, electricity, and basic services, in addition to 36 cases of malnutrition, 8 high risk pregnancies, and 3 cases of prostatic hypertrophy. The IACHR granted the protective measures on September 29, 2017, requesting that the state ensure the protection of the rights of the community, find an immediate solution, and facilitate ongoing dialogue to ensure this never happens again. The Constitutional Court also ruled in the community’s favor, concluding that, although actions had been taken to overcome the situation, these measures had not been effective. “Although it has been more than three years since the eviction, the precarious conditions continue to exist,” the Court stated.

Since then, the government has made meager attempts to find a solution, failing to comply with both rulings. Between June 29 and July 1, the Presidential Commission for Peace and Human Rights (COPADEH) conducted a visit with the community to observe the conditions of three parcels of land that could be purchased by the government for the community’s relocation. In a press release published by COPADEH, the committee applauded its attempt to resettle the community, stating, “These actions are in compliance with the precautionary measures issued by the IACHR, working in favor of the families.”

The families, however, were forced to reject the government’s proposal. The parcels offered were not only smaller than their previous lands, but would have to be purchased by the families, thereby throwing them deeper into poverty.

Carlos Martínez–a lawyer representing the community–denounced the offer from the state, explaining,“The people have been deceived; the Guatemalan state has not been transparent in the negotiations [but] turns a solution that should constitute a reparation for their rights into a debt for the people.”

The people of Laguna Larga continue to survive, day by day, in the hope of being able to once again work their land, provide for their children, grow as a community, and live lives of dignity.

At GHRC, we stand in solidarity with the community of Laguna Larga and reiterate their demands to the Guatemalan state to protect their rights.