At a press conference on Friday, April 17, representatives of 14 communities comprising approximately 629 families evicted in 2011 from the Polochic Valley denounced their current living conditions, which have led to issues such as malnutrition and starvation. The Committee for Campesino Unity (CUC) also stated that it will deliver a preliminary Red Cross report to President Pérez Molina on the critical health situation of the families.

Community members are calling on the Guatemalan government to 1) promptly attend to the malnourished children; 2) hold a high-level meeting with community members to discuss the situation, and; 3) fulfill its obligation to grant land to all evicted families.

In a joint effort by the Guatemalan Public Prosecutor’s office and the UN International Commission Against Impunity in Guatemala (CICIG), 20 officials were arrested on Thursday, April 16, including the current and former heads of Guatemala’s tax collection agency. The officials are being accused of being part of a tax fraud and contraband ring.

A warrant was also issued for Juan Carlos Monzón, the secretary for Guatemalan Vice President Roxana Baldetti, who is accused of being one of the operation’s ringleaders and is currently out of the country.

The arrests come amidst an important debate about whether or not the CICIG’s mandate, which is set to expire in September 2015, will be renewed. Although a diverse group of Guatemalan and international organizations have advocated for its continuation, President Pérez Molina has suggested that he will not extend the Commission’s mandate. END_OF_DOCUMENT_TOKEN_TO_BE_REPLACED 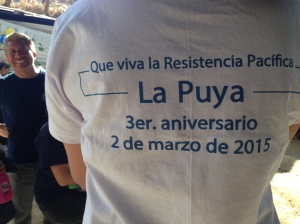 GHRC presented members of La Puya with a book of messages of solidarity at the movement’s third anniversary event.

“This is one of the most important human rights issues of our time,” stated Inter-American Commission on Human Rights (IACHR) President Rose-Marie Belle Antoine, referring to the wide-ranging effects of extractive industries on communities in Latin America. Last week, the IACHR held a hearing on this topic as part of its 154th session.

During the hearing, members of the Catholic Church presented emblematic cases of human rights violations resulting from extractive projects in the region. They also detailed the criminalization of land rights defenders, and raised concerns about the serious damage being done to the environment as well as to indigenous communities.

“We can live without gold, but not without water,” said Álvaro Leonel Ramazzini, a bishop of the Catholic Church in Guatemala and a petitioner at the hearing. Bishop Ramazzini also noted the importance of prior consultation and called for other sustainable models of development that will not undercut the local economy. END_OF_DOCUMENT_TOKEN_TO_BE_REPLACED

Community leaders will be released after unjust imprisonment

Five community members from Mataquescuintla, Jalapa, who were illegally imprisoned for seven months, have succeeded in proving their innocence. On Thursday, a judge in Jalapa dismissed the charges against them due to lack of certainty and weakness of proof brought forth by the Public Prosecutor’s office. Communitaria Press calls this development “a victory for peaceful resistance,” as those imprisoned were criminalized for their resistance to the Escobal mine. Canadian-based Tahoe resources and it’s Guatemalan subsidiary San Rafael Mining have carried out recurring acts of violence against peaceful protesters, and the government has used its own institutions to support the company.

Meanwhile, Tahoe Resources recently announced that the company is ready to ramp up production at the Escobal silver mine. Though the company reported a net loss last quarter (the first quarter of production), its stocks rose following this announcement.

The Public Prosecutor’s Office wants the Constitutional Court to revoke a prior decision to modify charges against eight military members, led by Col. Juan Chiroy Sal, involved in the killings of six people during the October 4, 2012 confrontation in Totonicapán. The eight men were originally charged with extrajudicial killing and attempted extrajudicial killing, but High Risk Court A Judge Patricia Flores reduced the charges. The lawyer for Chiroy Sal criticized both the prosecution for maintaining their original claim, as well as the protesters for committing actions of violence during the confrontation.

END_OF_DOCUMENT_TOKEN_TO_BE_REPLACED

The dialogue between the government and six communities in Northern Huehuetenango did not result in visible progress this week. Among other requests, community members asked for the suspension of three hydroelectric dams; the promotion of a community referendum; and the revocation of 24 arrest warrants against community leaders. The dialogue ended with an agreement to forgo violent protests and draw a road map that will lead to a positive outcome.

Eight supposed members of the Mara 18 gang were arrested on Tuesday for allegedly carrying out the Nacahuil massacre on September 8. Attorney General Claudia Paz y Paz said that the supposed motive of the massacre, which killed 11 people, was the liquor store owners’ refusal to pay extortion money to a group of gang members. She also stated that the attack was ordered from inside a prison. Interior Minister López Bonilla stated that minutes before the massacre, the Civil National Police were tipped off to a potential attack there. Widows of the massacre continue to reject the alleged gang role in Nacahuil and still believe that the Civil National Police were involved in the night’s events.

END_OF_DOCUMENT_TOKEN_TO_BE_REPLACED

Urgent! Communities in Huehuetenango are under siege by Guatemalan military and police. The security forces were sent to break up peaceful protests in reaction to the illegal detention of a local resident. Several people have already been injured and we fear that there could be further violence.

Please call the Guatemalan Embassy to express concern about the safety of peaceful protesters in Huehuetenango. Urge the Guatemalan government to avoid further conflict, uphold the rule of law and respect human rights.
In the US: 202-745-4953. In Canada: 613-233-7188.

Please tweet at the Guatemalan government to ask them to avoid further conflict and ensure the human rights of peaceful protesters. Suggested tweets (with translations to English) are below.

Over the last few years, various municipalities in northern Huehuetenango have protested against planned mega-development projects including the Canbalam Dam in Santa Cruz Barillas. Recently, protests have included roadblocks across the region to pressure the Guatemalan Government to enter into a real, public dialogue with those opposed to the projects
On Sept. 28, Mynor López, who has been active in the resistance movement, was seized by men in civilian clothes, taken to a military helicopter, then handed over to the police. In response to the abduction, protests erupted across northern Huehuetenango, blocking various roads. The government mobilized hundreds of police and soldiers to break up the protests using tear gas launched from army helicopters as well as live rounds fired by security forces. A soldier was killed in the clashes. Despite evidence that his injuries were self-inflicted while attempting to fire a tear gas canister, the government publicly blamed protesters for his death.
In addition, the Interior Minister announced that 40 arrest warrants would be carried out for various acts allegedly committed since 2011. Over the past year and a half, over a dozen community members have been arrested for their resistance to the Canbalam Dam. Several of them were incarcerated for up to eight months before being released because of a lack of evidence against them.
A delegation organized by the International Commission of Jurists visited Mynor in jail and report that he shows evidence of physical violence, even torture.
Community members are now asking the government to respect an agreement reached on September 30 to withdraw security forces and have a real dialogue regarding the proposed hydroelectric dam. Can you stand with them and help prevent further bloodshed?

(You must guarantee the protection, well-being and #humanrights of citizens in Huehue #Guatemala)

On September 7, 11 were killed and 15 injured after gunmen opened fire at a cantina in the indigenous village of San José Nacahuil, San Pedro Ayampuc. Though officials blame the attack on gang violence, families of the victims report that police are responsible and call for officials to hold them responsible.

Analysis following this tragedy has indicated the possible connection to the peaceful non-violent resistance at “La Puya,” which community members of Nacahuil are involved in. One theory is that the massacre was carried out to justify militarizing the community and providing security to the mining project, which has been delayed for over a year because of the community’s peaceful resistance known as La Puya. Representatives of La Puya note that this event comes after their peaceful, non-violent resistance has been facing intimidation from police patrols since August 31, and that in the past events like this one have come before repressive measures against La Puya.

The Interior Minister is evaluating whether to place a police station in San José Nacahuil in the future. The police left the village around 2004 due to local sentiment that the patrol was causing more insecurity. END_OF_DOCUMENT_TOKEN_TO_BE_REPLACED

The Western People’s Council of Mayan Organizations (CPO) has filed a complaint before the Inter-American Commission on Human Rights (IAHCR) against Guatemala’s Mining Law, based on the law’s lack of a mechanism to consult with indigenous communities, which the CPO claims violates international law. Previously, the CPO challenged the law before Guatemala’s Constitutional Court but the Constitutional Court upheld the Mining Law, leaving the CPO no recourse but the IACHR.

Iván Velásquez Gómez is the new head of the International Comission Against Impunity in Guatemala (CICIG). President Otto Pérez Molina announced that this was the last period of CICIG in the country and the investigation of ongoing and new cases will continue until 2015, when they will have to transfer the work to the Public Prosecutor’s Office and the National Civil Police.

While the government is set next week to give 140 land titles to families evicted from the Polochic Valley two years ago, these residents point out that land is not sufficient to return to a sustainable lifestyle. The area where they will be relocated is more than 80 km from their original community of Agua Caliente and lacks water, roads, and basic services. They also expressed frustration over the cumbersome and bureaucratic process of obtaining the titles.

END_OF_DOCUMENT_TOKEN_TO_BE_REPLACED

Since Friday, March 15, Rubén Herrera, member of the Departmental Assembly of Huehuetenango for the Defense of Natural Resources has been imprisoned in Huehuetenango, Guatemalaemala. He is charged with crimes including kidnapping and terrorism allegedly committed in relation to resistance to the Cambalam hydroelectric dam, operated by Spanish owned Hidro Santa Cruz. Citing irregularities in his case, over 2800 people from 52 countries have signed a petition to Guatemala’s Public Prosecutor’s Office and President Otto Pérez Molina calling for Herrera’s immediate release. On May 22, GHRC and NISGUA staff handed over the signatures to the Prosecutor’s Office.