From October 17-23, human rights defenders and activists participated in hearings with the Inter-American Commission on Human Rights (IACHR) in Washington, DC. The Guatemala-focused hearings included the topics of transitional justice, criminalization of human rights defenders and justice operators, and the damaging impacts of monoculture African Palm plantations. Photos and videos from each hearing are available here.

The Guatemalan government made its first disbursement of Q22 million to family members in Baja Verapaz, as part of the reparations plan for the 33 communities affected by the construction of the hydroelectric Chixoy Dam. This marks the first action toward the implementation of the plan, which was finally signed by community representatives and former President Pérez Molina in November 2014. END_OF_DOCUMENT_TOKEN_TO_BE_REPLACED

Riding a wave of anti-establishment emotion, Jimmy Morales – a comedian with no political experience, and backed by military hard-liners – has been elected as Guatemala’s next president.

Morales saw his popularity surge amid a series of corruption scandals that led to mass citizen protests, the arrest of several high-level government officials, and the resignation of former president Otto Pérez Molina. Capitalizing on his reputation as a “political outsider,” Morales achieved an unexpected first-round win in September before defeating former First Lady Sandra Torres in the October 25 runoff election.

Jimmy Morales, like his opponent, has made promises of transparency and anti-corruption efforts. But he has drawn criticism for his vague policies, his use of racist caricature, and the fact that some of his backers – including the founders of his political party FCN – are conservative members of the military who have been linked to war crimes from the internal armed conflict.

Though some Guatemalans are cautiously optimistic about the future, many remain skeptical that Morales will be able to pull the country out of its current political turmoil. “Nothing is going to change,”one voter said via Twitter – even as she cast her ballot.

Questions about the possibility of seeing lasting change in Guatemala were reiterated last week in Washington, DC, where members of Guatemala’s Human Rights Convergence and other civil society organizations participated in hearings at the Inter-American Commission on Human Rights (IACHR) and met with US government officials.

In back-to-back hearings on transitional justice and the criminalization of human rights defenders in Guatemala, petitioners highlighted prominent examples of criminalization, including the defamation and unfounded complaints against lawyers and expert witnesses in the genocide case. END_OF_DOCUMENT_TOKEN_TO_BE_REPLACED

In a context in which at least 282 municipalities have reported threats of conflict on election day on September 6, UDEFEGUA urges all citizens — whether they choose to vote for a candidate, casta null or blank vote, or abstain from the process entirely —  to exercise their rights peacefully.

Despite the recent resignation of Otto Pérez Molina, a deepening political crises, and calls for the postponement of general elections, Guatemalans are gearing up for election day on September 6 — so far set to move forward as planned.

In addition to the presidential election, Guatemalans will also be voting for all 158 congress people and mayors in every city. Here, interestingly, the slate of candidates includes a number of people who come not from partisan political backgrounds but from Guatemala’s historic social movements and indigenous leadership structures.

The pool of candidates for president, though, has left voters feeling deflated, and analysts estimate that there will be high rates of absenteeism and “null” votes. (Null votes are used as a purely symbolic statement of dissent, given that a single vote can decide an election.)

Of the 14 parties that have launched presidential candidates, a handful have emerged as the most popular in polls:

Baldizón is rumored to be engaged in illicit activity in Petén, though he is not under investigation. He has been an outspoken critic of the CICIG, which is currently investigating his vice-presidential candidate, Edgar Barquín, for criminal conspiracy, influence trafficking and money laundering.

Morales is a professional comedian with no experience in politics, yet his presidential campaign and has become very popular in polls. A candidate with the FCN party, he presents himself as a “new option,” but is funded in part by hard-liners in the Guatemalan military. Morales has also been linked to Byron Lima, a former military captain currently serving a sentence for the 1998 assassination of Bishop Juan Gerardi and who is now accused of criminal conspiracy and influence trafficking from within prison.

Sandra Torres has been called the “least worst” by some. Of the center-left UNE party, she was first lady during President Colom’s administration, 2008-2012; she forged a divorce in order to run for president in 2011 but was barred. Her vice-presidential running mate is also under investigation for criminal activity.

Ríos is the daughter of military dictator Efraín Ríos Montt, accused of overseeing a campaign of genocide and war crimes in the early 1980s. As the family member of a participant in a military coup, her candidacy is technically illegal.

González is a former energy minister who is currently facing charges for alleged influence trafficking.

UPDATE | Sept. 4: Polls show that support for Baldizón has decreased, with Morales and Torres tied for the lead.

UPDATE | Sept. 5: UDEFEGUA released a press release calling for the peaceful expression of rights on Sept. 6, including for those who choose to cast a null vote or choose to abstain from the process.

UPDATE | Sept. 6: Guatemala’s new president, Maldonado Aguirre, voted early in the morning, reiterating the importance of reforms and urging “dialogue before conflict.” Many voting stations opened as normal and without conflict, though with mixed results in attendance.

Although the process has overall been peaceful, several issues of interference in the voting process have been reported, including: 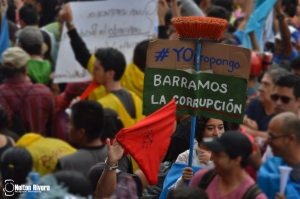 Investigations into corruption in Guatemala have expanded to the highest levels of government as President Otto Pérez Molina and his former Vice President Roxana Baldetti were named on Friday as the head of “La Linea,” a criminal structure that has been robbing an unknown amount — but what could amount to hundreds of millions of dollars — from the State. Baldetti, who resigned on May 8, is in police custody, and will face prosecution for criminal conspiracy, customs fraud and accepting bribes. Guatemala’s top court also approved a process to repeal the president’s immunity from prosecution, and the matter now awaits a decision from the congress.

These investigations have spurred massive and sustained protests calling for the president’s resignation and represents a historic opportunity to bring about meaningful reform in a moment when the nation is on the verge of institutional collapse. With unprecedented momentum building to address unbridled government corruption and impunity, the biggest impediment to successful reform may be the September 6 elections.

The move to bring the president and vice president to justice is only the latest development in a series of corruption scandals that have linked numerous high-level public officials, and all major political parties, to corruption and other illicit activities. In May alone, seven different government ministers resigned or were fired, many under investigation for charges ranging from granting anomalous contracts and influence trafficking, to criminal conspiracy and fraud. This week, numerous cabinet members resigned, including at least five more government ministers. END_OF_DOCUMENT_TOKEN_TO_BE_REPLACED

With just weeks until Guatemala’s ‪ general elections, public prosecutors and the CICIG revealed that they have uncovered enough evidence to place President Pérez Molina and former Vice President Roxana Baldetti at the top of a tax fraud scandal that has rocked the country since mid-April. Baldetti was arrested on August 21.

The announcement prompted another wave of resignations from government ministers; however, President Pérez Molina again rejected calls for his resignation in a public statement on Sunday.

In this opinion piece, GHRC Executive Director Kelsey Alford-Jones discusses Guatemala’s current political context, ponders what might happen next in the country, and explains the risks of moving forward with elections without much-needed reforms.

On August 18, a team of medical evaluators ruled that Ríos Montt suffers from “incurable” dementia, a development which could prevent Montt from ever again facing trial. This was the final decision in a series of psychiatric evaluations of Montt that has delayed the trial for weeks. In a hearing is set for August 25, judges will decide whether or not the retrial will move forward. END_OF_DOCUMENT_TOKEN_TO_BE_REPLACED

The Supreme Court has approved for congress to decide whether to remove President Pérez Molina’s immunity from prosecution for possible involvement in the “La Linea” and IGSS corruption scandals. Should Perez Molina be put on trial, his possible prosecution would essentially result in his impeachment. 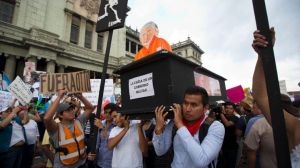 In this Saturday, May 30, 2015 photo, protesters carry a fake coffin with a effigy of Guatemalan President Otto Perez Molina during a protest to demand his resignation in Guatemala City. (AP Photo/Moises Castillo) (The Associated Press)

A recent poll by Costa Rican firm Borge y Asociados indicates that while conservative candidate Manuel Baldizón is still the favorite to win the upcoming presidential election, comedian Jimmy Morales is gaining support. Morales is seen as an anti-establishment candidate with little ties to Guatemala City, which could benefit him with the recent public outcry over government corruption. Morales is running as a member of the right-wing party, Frente de Convergencia Nacional, which has ties to the military. However, many express their doubt in Morales’ ability to lead as president. He has also recently made controversial comments about the past internal conflict in the country, including his denial that genocide was committed against the Maya Ixil people. END_OF_DOCUMENT_TOKEN_TO_BE_REPLACED