At a press conference on Friday, April 17, representatives of 14 communities comprising approximately 629 families evicted in 2011 from the Polochic Valley denounced their current living conditions, which have led to issues such as malnutrition and starvation. The Committee for Campesino Unity (CUC) also stated that it will deliver a preliminary Red Cross report to President Pérez Molina on the critical health situation of the families.

Community members are calling on the Guatemalan government to 1) promptly attend to the malnourished children; 2) hold a high-level meeting with community members to discuss the situation, and; 3) fulfill its obligation to grant land to all evicted families.

In a joint effort by the Guatemalan Public Prosecutor’s office and the UN International Commission Against Impunity in Guatemala (CICIG), 20 officials were arrested on Thursday, April 16, including the current and former heads of Guatemala’s tax collection agency. The officials are being accused of being part of a tax fraud and contraband ring.

A warrant was also issued for Juan Carlos Monzón, the secretary for Guatemalan Vice President Roxana Baldetti, who is accused of being one of the operation’s ringleaders and is currently out of the country.

The arrests come amidst an important debate about whether or not the CICIG’s mandate, which is set to expire in September 2015, will be renewed. Although a diverse group of Guatemalan and international organizations have advocated for its continuation, President Pérez Molina has suggested that he will not extend the Commission’s mandate. END_OF_DOCUMENT_TOKEN_TO_BE_REPLACED

The criminal trial against the former security chief of mining company Hudbay Minerals/CGN, Mynor Padilla, began on April 8 in Puerto Barrios, Guatemala. Padilla is charged with the murder of Aldofo Ich Chamán and the wounding of at least ten others who opposed Hudbay/CGN’s nickel mining project in El Estor.

Unfortunately, this is only one example of the violent encounters provoked by extractive projects in Guatemala. Hubday Minerals is already facing lawsuits in Canadian courts for other crimes related to their activities in Guatemala.

Oxfam’s office in Guatemala and 23 other organizations are joining together to call for the Guatemalan government to investigate the attack. END_OF_DOCUMENT_TOKEN_TO_BE_REPLACED

On Wednesday, May 28, over 1,000 men and women from the communities of Rio Negro left their homes. Traveling on dirt roads, over rocky mountain passes, and up a rain-swollen river they gathered at the resettlement village of Pacux. At 2 am the following morning, they boarded dozens of buses bound for Guatemala City. Six hours later, drawing on strength born of righteous indignation, they began their protest in front of the office of President Otto Perez Molina. They vowed to sleep in the streets, if necessary, until the President heard their message.

The signs carried by protesters and the slogans they shouted made clear their single demand: full implementation of a reparations plan — promised by the Guatemalan government — for damages they suffered over 30 years earlier due to the construction of the Chixoy Hydroelectric Dam. Stand with the communities by taking action now. END_OF_DOCUMENT_TOKEN_TO_BE_REPLACED

The 2014 U.S. Omnibus Appropriations Bill, which the U.S. Congress passed this month, continues to receive media attention this week. The Bill instructs the World Bank and Inter-American Development Bank (which co-funded construction of the Chixoy Dam in Guatemala) to support the implementation of reparations for the affected Mayan communities.

Some in Guatemala expressed concern that the conditions would affect foreign investment; others have argued that compensating the Chixoy victims reduces the negative perception that indigenous communities have regarding hydroelectric dam projects. For affected communities, however, the Bill provides an important mechanism through which to pressure the Guatemalan government and the banks to follow through with their obligation to provide reparations to those affected by the dam. The story has received international attention, and was featured in the The Guardian.

The Bill further requires the U.S. Department of State (DOS) to certify the Guatemalan government has met a series of human rights conditions before the Guatemalan army will be allowed to receive DOS funds. END_OF_DOCUMENT_TOKEN_TO_BE_REPLACED

Originally posted in Toward Freedom on February 12, 2013 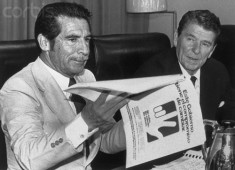 In December 4, 1982, former President Ronald Reagan spoke in Honduras after meeting with Efraín Ríos Montt, the evangelical Guatemalan General who seized power in a military coup a little over 8 months earlier.

“I know that President Ríos Montt is a man of great personal integrity and commitment,” said Reagan. “I know he wants to improve the quality of life for all Guatemalans and to promote social justice. My administration will do all it can to support his progressive efforts.”

Two days later the regime that Reagan said was getting a “bum rap” sent a contingent of Kabiles, Guatemala’s notorious special forces unit, to the department of Peten. There they entered the village of Dos Erres, where they tortured the men, raped the women, took hammers to the children, and in the end murdered as many as 250 people. Afterwards they burnt the village to the ground as part of Rios Montt’s “scorched earth” campaign against the country’s Mayan population.

Thirty years later Ríos Montt may finally face justice. On January 28, 2013 a Guatemalan judge ruled that the former head of state accused of responsibility for “1,771 deaths, 1,400 human rights violations and the displacement of 29,000 indigenous Guatemalans” would be tried for genocide in a domestic court. This precedent-setting decision was lauded internationally by human rights activists and NGOs. END_OF_DOCUMENT_TOKEN_TO_BE_REPLACED